While deploying a LoRaWAN network, an operator is faced with the critical task of breaking the network’s self-sustainability point as soon as possible, when the revenue from providing service by connected end nodes begins to exceed the cost of maintaining the network. Unfortunately, many operators are faced with the fact that te volume of connected devices is not growing fast enough to pass payback threshold.

We are inclined to consider one of the reasons of this fact to be blind copying of the mobile networks deployment paradigm when base station has to be mounted on own or rented towers. Such an approach is justified in the case when it is critical to ensure continuous communication coverage of the entire city without blind spots, as people are constantly moving around the city. The quality of service directly depends on this. If the client is not satisfied with the quality of mobile communication and speed of the internet connection he simply moves to another mobile operator. As a result, mobile operators go for a continuous covering of agglomeration clusters with a dense network of base stations regardless of the costs of deploying new stations and their maintenance. The widespread ubiquity of smartphones among the people gives operators reason to believe that the network will be profitable in any case. In addition, wireless internet traffic is growing steadily, gaining market share from home internet providers.

Many LoRaWAN network operators, who have to choose same way to build network have fallen into the trap in the expectation that the number of end nodes has to be connected to network will grow rapidly with expanential speed. But if it is not grows so fast operator facing with the fact that the network deployed widely doesn’t has enough amount of end nodes to be economically viable.

The question is about reducing operating costs. First of all, the operator stops the expansion to new regions and cities.  Attempts are being made to share the same base stations with a group of operators. There is a transition to network segmentation, when communication is provided only  in areas of deploying LoRaWAN solutions is expected. For example, if banch of end nodes like water/electricity/heat/gas meters has to be mounted in set of buildings the LoRaWAN gateway is installed on the roof of one of that buildings to avoid the need for rental payments as it would be in the case of mounting gateway on a tower.

This approach can signiicantly reduce the cost of network deployment. And indeed, once installed end nodes are not moving anywhere during their life cycle. Accordingly, there is no need for continuous coverage. Since the most successful implementation of LoRaWAN solutions at the moment is observed precisely in the housing sector, we can say that segmentation of the coverage allows us to find a compromise between the growth rate of the network and the containment of its maintenance costs that gives the way to profit from the first days of network deployment.

Are there other ways to reduce the cost of deploying a LoRaWAN network?

Since the housing and communal services is the most actively developing area for the implementation of LoRaWAN solutions, further in the text we will concentrate on this particular area. 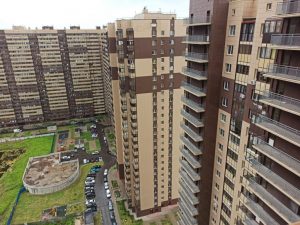 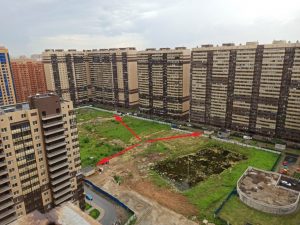 Developers, seeking to maximize profits, build max number of square meters of living space on the minimum area of the city. This is achieved by increasing the number of storeys in new buildings and increasing the density of buildings. This approach is supported by the administration, since it is reduces the length of communal and transport communications.

Proceeding from this, when it comes to implement a LoRaWAN solution in a single residential complex, the idea of ​​placing a gateway not on the roof of one of the buildings, but at a point of geometric equidistance from all the buildings to be equipped with LoRaWAN end nodes suggests itself. Right in the center of the courtyard in this case. This makes it possible to achieve the distance from the gateway to any of the end devices within 100-200 meters! In this case, most of the space will be open!

Other objects of infrastructure can be the walls and access doors of high-rise buildings. Outdoor cameras, intercoms, access systems in parking lots with a built-in LoRaWAN gateway can also reduce the cost of deploying LoRaWAN network as mounting of outdoor camera with integrated LoRaWAN gateway costs about $50 while mouning of LoRaWAN gateway on the roof of building costs not less than $500.

m2m-tele.com deveops a set of electronic devices such as outdoor cameras and intercoms with integrated LoRaWAN gateway that will allow to deploy LoRaWAN network spending much less money on this compared to the previling approach when deploying the network.