Each software developer who decides to start with Embedded linux development, coming either from high-level programming languages, or from bare metal development for microcontrollers in C/C++, is inevitably surprised by the extreme unfriendliness of embedded linux. A text pad and console utilities instead of the usual IDE and debugging using logs instead of debugging using programmator greatly slows down the development process. You have to cross-compile target application or even whole images again and again and deliver it to target hardware to test how it works.

This article describes how I was able to reduce the delivery time of changes to the target hardware when cross-compiling 10 times.

Is a process of building binary image or executable ffile for target device on host machine with different architecture. It is commonly used in a case of Embedded linux driven target hardware with low amount of available Flash and RAM (32Mb and 128Mb in our case) so no way to compile anything on target hardware itself.

In that case typical flow of changing source code on target hardware is following:

Most of the time, obviously, is spent on the second stage. It slows down especially dramatically when working with heavyweight libraries with a lot of dependencies. В нашем случае это библиотеки  tensorflow-lite  (used for neural networks)  and alexa-voice-sdk (voice assistant).

All three stages (full image building and firmware upgrade) took us 150 minutes. Of course, this was rarely encountered.

At some point in time this became very tedious, as development process slowed down dramatically. Each light change in source code required a long compilation and delivery process. As a result, one day we decided to get rid of this pain.

As a result we got:

Of course, miracles do not happen and we had to spend a large enough amount of money to achieve such a result. The easiest way was to speed up as much as possible, obviously, the first stage. To do this, we just switched to the fastest Internet tariff suggested by our provider.

We doubted for a long time whether it would make sense, but nevertheless decided after reading articles about inspirational benchmarks and bought an AMD Threadripper 3970X based workstation: 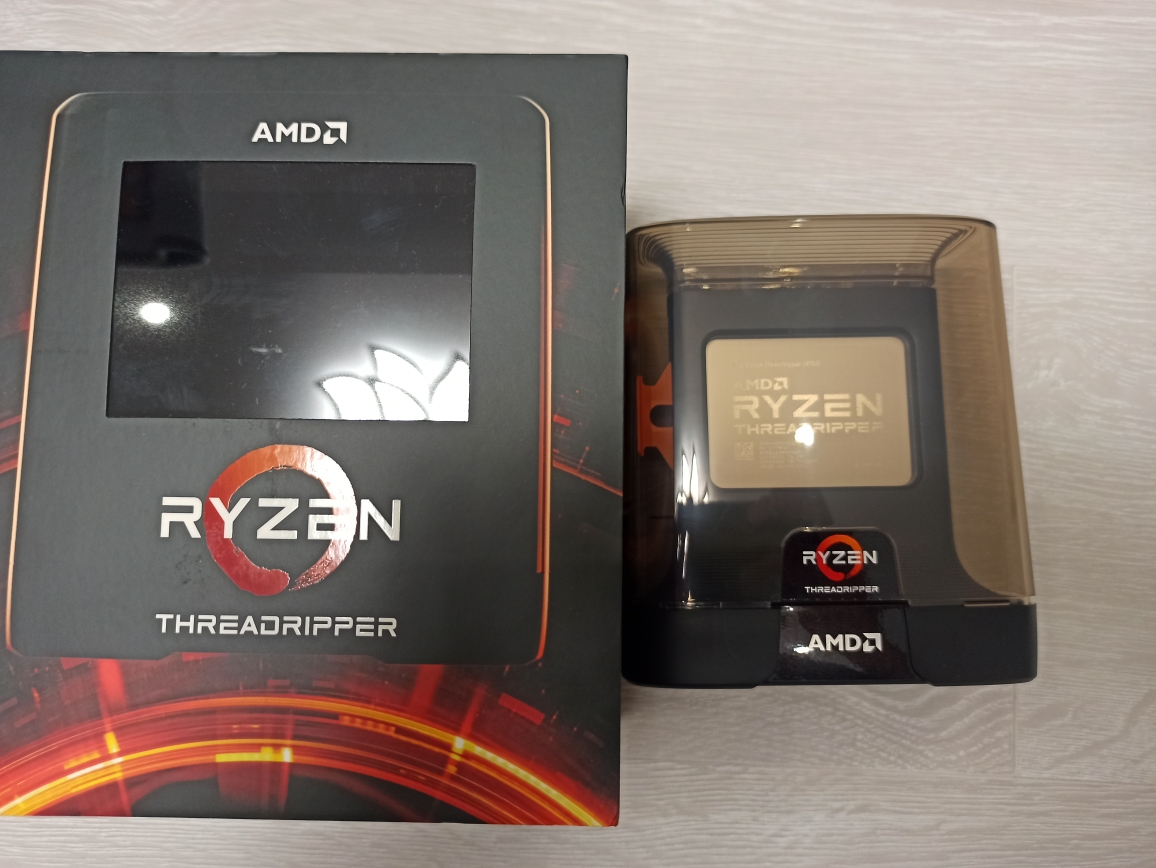 Finally got all components and finished assembling the PC late at night, installed Ubuntu and first of all started building the firmware. Disappointing to see that it takes more than 30 minutes to compile image instead of expected 2 minutes. Didn’t I saw that timing on benchmarks? Ofcource I used -j64 flag. Went to bed upset. Next morning I started compilation along with running htop utility. Mostly I saw following during build process:

The latter inspired me. Seems that I just need to figure out why my build environment won’t use all 64 cores I have even with -j64 flag provided by me. So google gave me answer quite fast with source code example (Pull request at one of the last comments in thread) to fix the issue. So after making same changes at my source code I got desired three minutes to recompile image. I was so happy! The purchase fully justified itself!

In addition to this, I tried to play with RAMDISK:

but didn’t get any speed up of build process.

Speed Up firmware delivery from Host to Target

Thanks for google I knew that instead of copying resulted binary firmware from Host to Target using scp and firmware upgrade using sysupgrade I can use remote resources to boot kernel image and remote file system instead of onboad flash IC of my target hardware. Keeping in mind from my experience how difficult it can be to install and configure properly an utility like NSF server, I decided to include TFTP-server and NFS-server both in my build environment using Docker and Docker-compose. In short they are like a magical pill to remove headache of fighting with countless error messages during installation and configuration some new utility you want to install. Instead of this you just press a button:

here is Dockerfile of TFTP-server:

To start on a host machine type:

The only thing to do after that is placing kernel image file (uImage) of your target device in volume folder which appeared after running TFTP server with previous command:

Everything is ready to boot kernel of target hardware from TFTP server (u-boot in our case). But before switching to target device console don’t forget to check firewall on the host:

if it is in active state just disable it temporarily:

Kernel of linux to be loaded by bootloader. In a case of using U-boot no need to recompile anything in source code as U-boot able to boot from remote TFTP-server by default. First of all you have to save current booting cmd:

Later if will need to restore your boot mode back you will be able to do it just by typing:

Next step we need to provide network settings to let bootloader to know where in network can he find kernel image:

where 192.168.31.99 is static IP address to be used by target device, 192.168.31.37 – is IP address of Host Machine, 0x82000000 – is address in RAM kernel image to be stored for booting and openwrt-imx6ull-cortexa7-tensorflow_wifi_dev-uImage – is kernel image to be downloaded. It was placed in volume folder on previous step. If you don’t know loadaddr first of all check that isn’t it provided already? Otherwise device will be unable to boot kernel at all. Just type:

and check for that variable or any other variable with similar name.
Now let’s try to ping server:

Ok. So if everything is ok network settings we need to save them to not input them again on next booting:

And there is time to boot:

and press enter on countdown to be started. Here you entered U-boot console again.

Now you have devbootcmd for development purposes to boot from network and previously stored defbootcmd to boot from onboard flash for production purposes.
To check if it works just reset the device:

You should see similar for previous log messages of downloading uImage from network. But we still using jffs from flash IC. Time to install NFS server to mount network file system.

We will use Docker as we did it for TFTP server.

and entrypoint.sh script used by Dockerfile:

Same command to be used to build container and start it:

Similar folder (volume) to be used to mount inner docker container folder with host directory. That folder to be shared in network. Here we need to unpack archive with target file system:

You can test NFS server from another machine in same local network by running:

where 192.168.31.37 – is IP address of machine running NFS server and /home/al/mnt – local folder to be mounted to network folder shared by server. You can unmount folder any type by entering:

Now it is time to test NFS at target device. First we have to check if NFS support enabled in our current kernel at all? For that we type:

in root folder of our linux distributive sources. UI configuration menu should opens. Here you need to find “Compile the kernel with rootfs on NFS” option. Such option location might changes from distributive to distributive. In our case it is placed at: 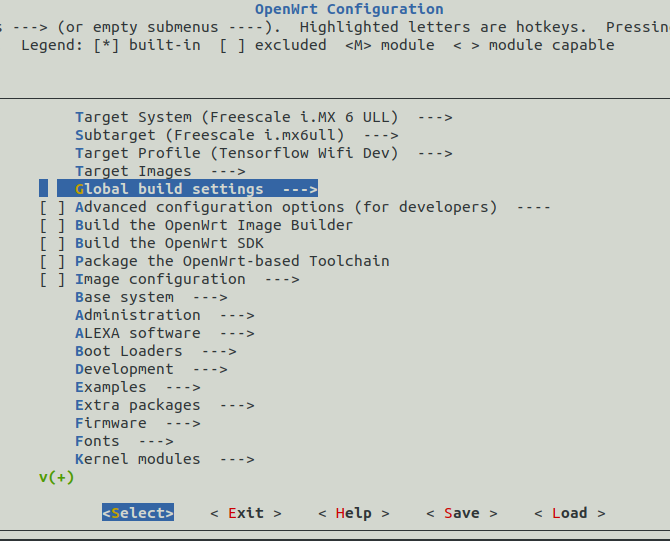 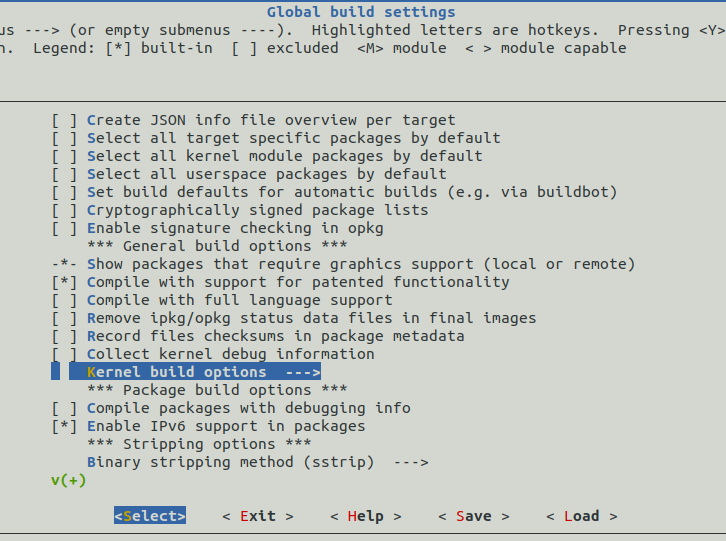 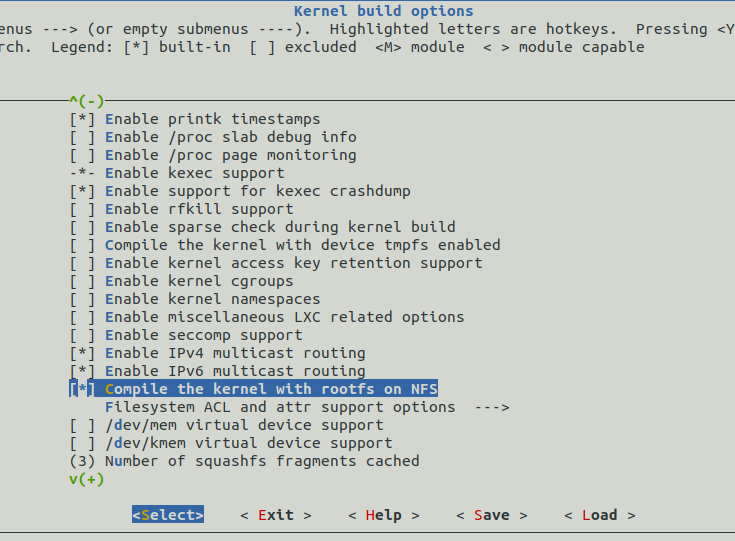 If you see that this option already enabled (* sign exists) you can to mount NFS to your target machine just by providing single configuration parameter in U-boot console. Otherwise (as in our case) you have to do following:

So the only configuration option need to be provided at U-boot is bootargs but, again, you have to check current value of that parameter:

if it returns something store it as default (production) parameter:

Later, when you will need to switch back to default boot mode you have to type:

if you saved something previously. Otherwise you need to remove bootargs instead of restoring it’s default value:

And here is how you need to set bootargs to boot from NFS:

and then reboot device:

Let the bootloader to boot kernel from TFTP-server. But now it should also mount network file system. Wait for console activating and type:

Great! Now any change in volume folder of NFS server at Host will become immediately available at target file system. To test it create hello_world file on Host machine:

and check if it available at target:

you should see it there.
So what is the point to boot from TFTP and NFS? Speed! On recompiling something at host you can deliver changes to target device almost immediately in a case of single application recompilation – you need just to cp it to NFS’s volume folder and about 10 seconds in a case of whole image recompilation (cp kernel uImage and reboot). Instead of wasting 3-7 minutes by doing it using scp and sysupgrade utilities. You can automate cp procedure by modifying build scripts ofcourse.

At U-boot you can switch to any boot mode any time. To development (network) mode:

if nothing was stored to that variable previously.
Here is commits implementing everything described here.
Tested and used on real hardware.

So time of most common development scenario (second and third stage) when we make some changes in source code and recompile image image/single application followed with delivery that change to target device reduced:

It gave as way to test up to 20 changes in source code on target hardware per hour instead of 1-2 changes earlier. Embedded linux development process speed increased 10x times! Can’t believe that we wasted so much time for it before!

Join our telegram channel to see more photos and videos from development process.